Fuzzy Sets theory, developed by Zadeh (1965), is a useful and appropriate approach to deal with imprecise and uncertain information in ambiguous situations (Farrokhizadeh et al., 2021). After introducing fuzzy sets by Zadeh (1965), they have been prevalent in almost all branches of science (Kutlu Gündoğdu and Kahraman, 2019a). Many researchers (Zadeh, 1975; Grattan-Guinness, 1976; Atanassov, 1986; Yager, 1986; Atanassov, 1999; Smarandache, 1998; Torra, 2010; Cu’ò’ng, 2014; Yager, 2017; Gündoğdu and Kahraman, 2019a) have introduced many extensions of ordinary fuzzy sets in the literature. Numerous researchers have utilized these extensions in recent years in the solution of multi-attribute decision-making problems (Gündoğdu and Kahraman, 2019b). These extensions are presented in a chronological order, as given in Fig. 1.
The latest extension of fuzzy sets is Spherical Fuzzy Sets (SFSs), recently developed by Kutlu Gündoğdu and Kahraman (2019a), where the squared sum of hesitancy, membership, and non-membership degrees is at most equal to 1.

The concept of Spherical Fuzzy Sets (SFS) provides a larger preference domain for decision-makers to assign membership degrees since the squared sum of the spherical parameters is allowed to be at most 1.

Single valued Spherical Fuzzy Sets (SFS) ${\tilde{A}_{S}}$ of the universe of discourse X is given by:

Suppose that ${\tilde{A}_{s}}$ and ${\tilde{B}_{s}}$ be any two Spherical Fuzzy sets. So the basic operations of SFSs can be defined as follow:
Addition

Suppose that ${\tilde{A}_{s}}$ and ${\tilde{B}_{s}}$ be two Spherical Fuzzy Sets. Then to compare these SFSs, the score function (SC) and accuracy function (AC) are defined as follows:

Aggregated decision matrix.
Step 4. Establish the rank frequency non-negative matrix ${\lambda _{ik}}$ with elements that represent the frequency that ${A_{m}}$ is ranked as the mth criterion-wise ranking. By comparing the ${\mathit{SC}_{mn}}$ value of each column in the scored decision matrix (see Table 3), the m alternatives can be ranked with respect to each criterion ${C_{n}}\in C$ according to the decreasing order of $S{C_{mn}}$ for all ${A_{m}}\in A$. The results of the rank frequency matrix are shown in Table 5.

measures the contribution of ${A_{m}}$ to the overall ranking. Note that each entry

of the weighted rank frequency matrix

is a measure of the concordance among all criteria in ranking the mth alternative kth (Table 6). Where

Rank frequency matrix λ.
Step 6. Define the permutation matrix P as a square ($m\times m$) matrix and set up the following linear assignment model according to the

value. The linear assignment model can be written in the following linear programming format: 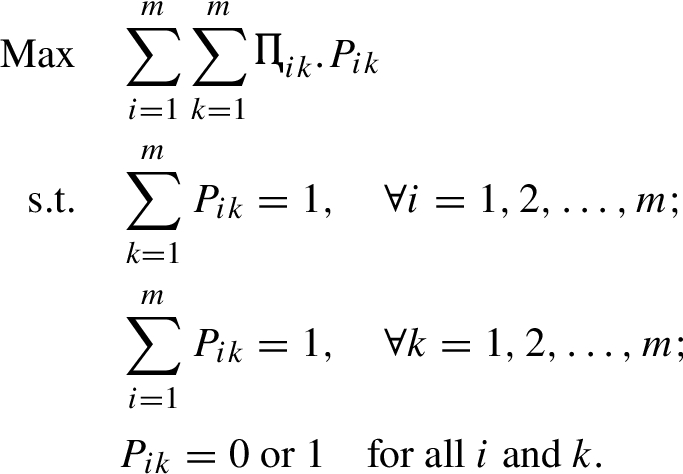 Step 7. Solve the linear assignment model, and obtain the optimal permutation matrix ${P^{\ast }}$ for all i and k.

.
Step 8. Calculate the internal multiplication of matrix ${P^{\ast }}.A={P^{\ast }}.\left[\begin{array}{c}{A_{1}}\\ {} {A_{2}}\\ {} \vdots \\ {} {A_{m}}\end{array}\right]$ and obtain the optimal order of alternatives.
The proposed algorithm has the following advantages. First, evaluation values are given as spherical fuzzy sets, which can consider the indeterminacy degree of decision-makers’ comments about alternatives. Second, the linear assignment method has been used to rank alternatives to avoid the effect of subjectivity.

In this section, a numerical example adapted from Kutlu Gündoğdu and Kahraman (2019b) illustrates the feasibility and practical advantages of the newly proposed method. This problem aims to select the best site location in order to establish wind power farms. The most preferred four cities (A1: Canakkale, A2: Manisa, A3: Izmir and A4: Balıkesir) are evaluated as alternatives. Four criteria have been determined in order to evaluate these alternatives. Criteria are environmental conditions (C1), economical situations (C2), technological opportunities (C3), and site characteristics (C4). The weights of alternatives obtained from the pairwise comparison matrix are $w=(0.360,0.158,0.169,0.313)$ for each criterion, respectively. Three decision-makers are going to evaluate the above four possible alternatives according to four criteria based on spherical linguistic terms, as presented in Table 1. The proposed method is used to rank alternatives.
Step 1. Construct the spherical fuzzy decision matrix based on evaluations of three decision-makers. The decision matrices are presented in Tables 7, 8, and 9.

Decision matrix based on comments of ${\textbf{\mathit{DM}}_{\mathbf{3}}}$.
Step 3. Calculate each alternative’s score value based on each criterion using Eq. (13). The results are shown in Table 11.

The score value of each alternative.

Rankingof each alternative based on each criterion.
Step 5. Compute

, as shown in Table 14. For example, consider

.
Step 7. Solve the above mathematical model by using GAMS 24.1.3 software, and the results are obtained as follows: 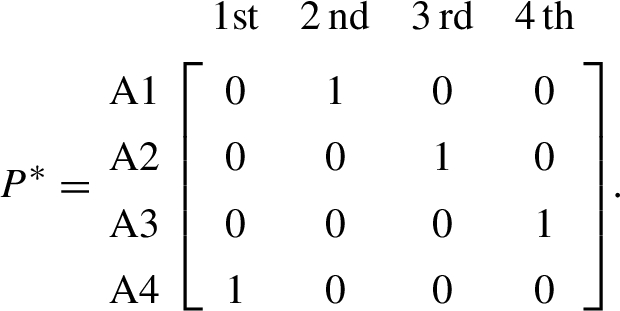 In recent years, spherical fuzzy sets have been very widespread in almost all branches. Spherical fuzzy sets are the last extension of the ordinary fuzzy sets that should satisfy the condition that the squared sum of membership degree and non-membership degree, and hesitancy degree must be equal to or less than one. In this study, the classical linear assignment model is extended to the spherical fuzzy linear assignment model, and the developed method is applied to site selection of wind power farm problem. In the proposed SF-LAM method, we firstly get the weight vector of the criteria using the pairwise comparison matrix. Then, the linear assignment method is performed to get the optimal preference ranking of the alternatives according to a set of criteria-wise rankings within the context of SFS. It has been successfully solved by SF-LAM and compared with SF-AHP and SF-WASPAS methods for the same problem. The ranking results in both methods are different, but the best alternative is the same in both approaches. The judgments of multi-DMs can be incorporated into the proposed method. Using the linear assignment model, we can determine the optimal ranking of the alternatives.
As the limitation of the proposed method, a single-objective mathematical model that just considers the maximization of criteria weights is used together with subjective linguistic judgments. To cope with these limitations, we suggest employing a multi-objective model to consider other influencing factors for further research. The weights of criteria could also be obtained using different methods such as maximizing deviation method. Another further research may be the usage of Pythagorean fuzzy sets in the proposed method instead of spherical fuzzy sets for comparative purposes.

Y. Donyatalab is a master student at Istanbul Technical University in the Industrial Engineering Department. His research areas are multi-criteria decision-making, fuzzy optimization, fuzzy mathematics, fuzzy inference system and fuzzy decision-making. He published some journal and conference papers in the mentioned fields.

S.A. Seyfi-Shishavan is a master student at Istanbul Technical University in the Industrial Engineering Department. His research areas are mathematical programming, healthcare optimization, multi-criteria decision-making, fuzzy optimization and fuzzy decision-making. He published some journal and conference papers in the mentioned fields.

E. Farrokhizadeh is a PhD student at Istanbul Technical University in the Industrial Engineering Department. Her research areas are mathematical programing, healthcare optimization, multi-criteria decision-making, fuzzy optimization and fuzzy decision-making. She published some journal and conference papers in the mentioned fields.

C. Kahraman is a full professor at Istanbul Technical University. His research areas are engineering economics, quality control and management, statistical decision-making, multi-criteria decision-making and fuzzy decision making. He published about 260 journal papers and about 190 conference papers. He became the guest editor of many international journals and the editor of many international books from Springer and Atlantis Press. He is the member of editorial boards of 20 international journals. He organized various international conferences. He was the vice dean of ITU Management Faculty between 2004–2007 and the head of ITU Industrial Engineering Department between 2010–2013. Fig. 1
Extensions of fuzzy sets (Kutlu Gündoğdu and Kahraman, 2019a). 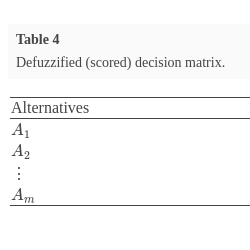 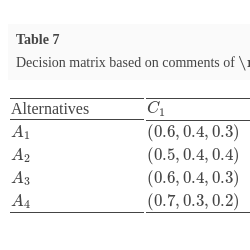 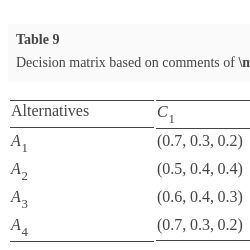 Table 11
The score value of each alternative. 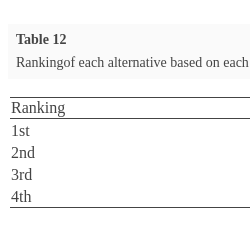 Table 12
Rankingof each alternative based on each criterion. 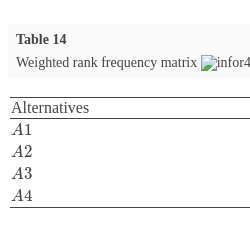 Extensions of fuzzy sets (Kutlu Gündoğdu and Kahraman, 2019a).

The score value of each alternative.

Rankingof each alternative based on each criterion.