In this area, we portray some foundation knowledge utilized as a part of this paper, containing IFP and DLP (Meshram et al., 2012).

The security of presented protocol depends on a regular complexity-hypothetical supposition, viz. GDLP and IFP supposition. We survey it as follows.

The decisional ϵ-GDLP and IFP hypothesis holds in G if not any PPT foe has no less than ϵ advantage in resolving the game, which is mentioned in Meshram (2015).

To decrypt the ciphertext C under identity $\mathit{ID}$ of entity:

An ID-based cryptographic protocol is $(t,\epsilon (t))$-semantically protected against an adaptive CPA, if all Probabilistic Polynomial Time (PPT) foes creating at the most t secret key inquiries have at the most an $\epsilon (t)$ advantage in breaking the scheme.

5 Execution Comparison with Other Protocols

Various analysts have as of late begun considering the utilization of ID-based cryptographic protocol in grid security. Our proposed ID-based cryptographic protocol has been designed using IFP and GDLP. By using our technique, we will develop an ID-based encryption model based on lightweight public key management techniques. It has small sizes key pair’s private and public keys as contrasted to other ID-based cryptographic protocols available in literature. It is more benefited in grid security architecture. The grid environment may have a huge amount of members that join and leave after some time and that certificates are utilized widely for each employment accommodation. This would definitely muddle key administration and intensification of the bandwidth necessity of a grid system. It was likewise noticed that these issues could be rearranged by utilizing certificate-free ID-based cryptographic protocol. Moreover, in the ID-based cryptographic setting, a user’s public key can be made and utilized promptly without the requirement for a public key certificate to be sent to the expected beneficiary (ordinarily via a Transport Layer Security (TLS) handshake). Be that as it may, as far as anyone knows, the dynamic utilization of ID-based keys was ruined by some conventional impediments of ID-based cryptographic protocol, for example, key escrow and the need to circulate private keys through secure channels. All the more critically, a portion of the fundamental security prerequisites wanted in the Globus Toolkit (GT) requires utilizing proxy qualifications for single sign-on and delegation, but our developed ID-based schemes are free from certificate and key escrow problems.
Pay-TV system broadcasts signals of TV channels to a great number of consumers. To enjoy these TV programs, each customer needs only a television, a set-top box and a smart card (conceivably connected to the decoder box). Since there is just a restricted correspondence channel from the administration supplier to the customer, it is necessary to find ways to make sure that only those consumers who fulfill the payment criteria are able to recover the TV signals. Likewise the service provider needs to make it difficult to duplicate the decoder box and make it easy to trace out the traitors if there are any pirate decoder boxes. We notice that pay-TV system is an application just identical to broadcast encryption.
Pay-TV system is an application identical to broadcast encryption on that just supporters who have satisfied the payment criteria are skilled to decrypt the encrypted TV signals. Any broadcast encryption scheme that is collusion resistant and with revocation ability can be used to construct a pay-TV system. A trivial way for constructing a broadcast encryption scheme (pay-TV system) is encrypting TV programs separately for each subscriber using our ID-based cryptographic protocol using IFP and GDLP. It will be a waste of bandwidth, so we improve the scheme by using the subset-cover framework. We evaluated our broadcast encryption scheme in terms of transmission cost (message header), storage (number of secret keys per user and public key size), as well as computational complexity (encryption and decryption cost) per user. The efficiency of our scheme is comparable to the symmetric Subset Difference (SD) scheme and the asymmetric (public key) SD scheme. The difference is that our scheme relies on tamper resistant smart card to achieve an efficient ID-based cryptographic protocol, so it is applicable to applications where smart cards are preferred. For instance, when subscribing for pay-TV service, what people need is a smart card issued by the providers, while they can buy all kinds of favourite set-top boxes from the market.

The author would like to thank both anonymous reviewers for their helpful advice. This work was supported by Dr. D.S. Kothari fellowship awarded by University Grants Commission, New Delhi, India.

Y.-M. Tseng is currently a professor in the Department of Mathematics, National Changhua University of Education, Taiwan. He is a member of IEEE Computer Society, IEEE Communications Society and the Chinese Cryptology and Information Security Association (CCISA). In 2006, his paper received the Wilkes Award from The British Computer Society. He has published over one hundred scientific journals and conference papers on various research areas of cryptography, security and computer network. His research interests include cryptography, network security, computer network and mobile communications. He serves as an editor of several international journals.

C.-C. Lee received the PhD degree in Computer Science from National Chung Hsing University (NCHU), Taiwan, in 2007. He is currently a professor with the Department of Library and Information Science at Fu Jen Catholic University. Dr. Lee is currently an editorial board member of International Journal of Network Security, Journal of Computer Science, Cryptography, and International Journal of Internet Technology and Secured Transactions, and The Open Automation and Control Systems Journal. He also served as a reviewer in many SCI-index journals, other journals, other conferences. His current research interests include data security, cryptography, network security, mobile communications and computing, wireless communications.

S.-G. Meshram received M. Tech degree in Soil and Water Engineering in 2009 with gold medal from College of Agricultural Engineering, Jawaharlal Nehru Krishi Vishwa Vidhyalaya, Jabalpur (M.P.); and PhD Degree in Water Resource Development and Management from IIT Roorkee (U.K.) India in 2015. She is currently Dr. D.S. Kothari post-doctoral fellow in the Department of Mathematics and Computer Sciences, Rani Durgawati University, Jabalpur, India. Her current research interests include geographical information systems, rainfall-runoff sediment yield modelling, SCS-CN. She is carrying out her research work in the field of rainfall-runoff, sediment yield, water quality, application of RS and GIS water network and cryptographic protocol. She has published more than 50 research papers in refereed journals, conference and workshop proceedings, and books. She is a member of an international society and reviewer of a reputed journal. 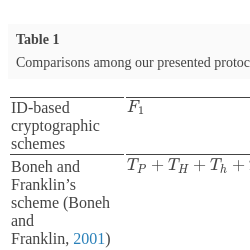 Table 1
Comparisons among our presented protocol and former protocols. 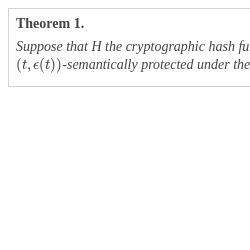 Comparisons among our presented protocol and former protocols.